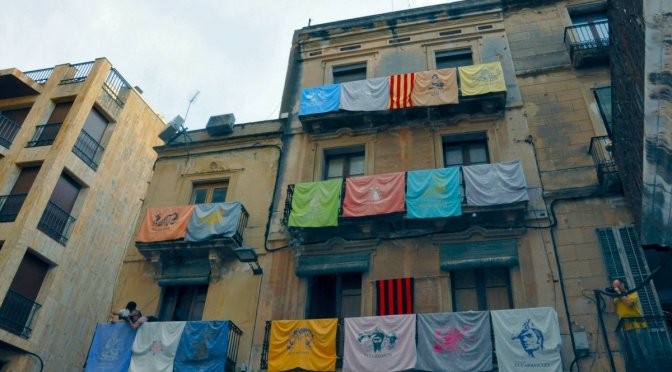 A diada castellera is the name of a gathering where colles build castells. Nothing more and nothing less.

Diades are held mainly while in the major festivals of a city, town or village, or because a certain festivity, or because on behalf or to honour a colla. This is, according to the CCCC, there are nowadays almost 90 colles castelleres all around the Catalan Countries, and there are, usually, around 53 weeks in a year. This means that last year 2013 castells reached a record with about 10.400 castells raised, as I stated in the previous post. Unfortunately I can’t tell how many diades have been celebrated to achieve this record.

Well, yes I could. There is data for it, it’s just that I am a lazybum and I have more stuff to do. But one day I’ll tell you more about the data applied in castells, it’s a whole world. I add it in the “posts to do” list.

And no, there is no Master of Ceremonies. At least usually. Although sometimes there could be a speaker, who actually is more annoying than useful. Most of them.

There is a non-written rule in castells that at least three colles should perform in a diada, although there are exceptions, especially with the diades hosted by the biggest colles like Castellers de Vilafranca, Colla Joves Xiquets de Valls, Colla Vella dels Xiquets de Valls, Colla Jove Xiquets de Tarragona and Xiquets de Tarragona. Usually when it comes a diada hosted by any of these colles, instead of three colles performing, there are four colles. With the exception of the two colles from Valls when it comes to their village. Then it’s only they two alone. And the competence between these two colles is really, really fierce.

Let’s imagine a Diada Castellera between the England Roses, the Scotland Thistles and the Wales Leeks in London. So, the plaça castellera could be, for instance, in London, in Trafalgar Square, just in front of Nelson’s Column. Just for the plasticity of the place.

Firstly, all three colles enter Trafalgar Square with a “walking pillar”, or a “pilar caminat”, this is… Well. This is what it means. Here the video:

As a diada has usually three rounds, plus the final round of pillars, sometimes it matters if you are the first, second or third in the round to build your own castells. Colles tend to help each other in the pinya, and if the castell fell down, the castell that your own colla wants to build may result jeopardised.

Normally, for this, the biggest castells are build in the first round, because in case of fell the target is already reached.

Let’s imagine how it would be the diada castellera in London, with the Roses, the Thistles and the Leeks:

Scotland Thistles: i4d8 (Try of eight stories, four people per story. It fell down even before being charged)

Roses: 10 pd4 (ten pillars of four, this is, because it’s their own diada they decided to build these)

We can say that this diada had two big colles of 8, the Roses and the Thistles, and a colla who just entered the realm of the 8-story castells, the Leeks. The Roses did a great diada with a 4d8, 3d8 and a Td7, what is called a “clàssica de 8”. The Thistles tried hard but they had this unfortunate falling in the first round, which caused them a couple of casualties. Luckily they had the necessary replacements to achieve the 4d8 but they decided to lower the bar in the third round because they had not the necessary people.

With this results, we could say that we would have been witnesses of the best diada overseas from Catalonia.

SOME KEY DIADES IN THE CASTELLER CALENDAR:

Les Santes: 27th July or the sunday before in Mataró.

Santa Úrsula: 27th October or following sunday in Valls. This diada is always set by the Colla Joves Xiquets de Valls and Colla Vella dels Xiquets de Valls, and it is perfect if you want to see casteller rivalry to its maximum.

Plus, every even year is set the Concurs de Castells in Tarragona. A three-day contest of castells. This year 2014 is set on the 4th-5th October.

Just when I posted this article, news came to me that the Casteller de Barcelona colleague Xavi Vila just died. From Strength, Balance, Courage i Seny I want to send all my condolences to his family and the Castellers de Barcelona and now, more than ever I want to wish them a lot of strength, balance, courage and common sense to join them in these moments.